A great way to carry multiple dirt bikes in the bed of your pickup truck. 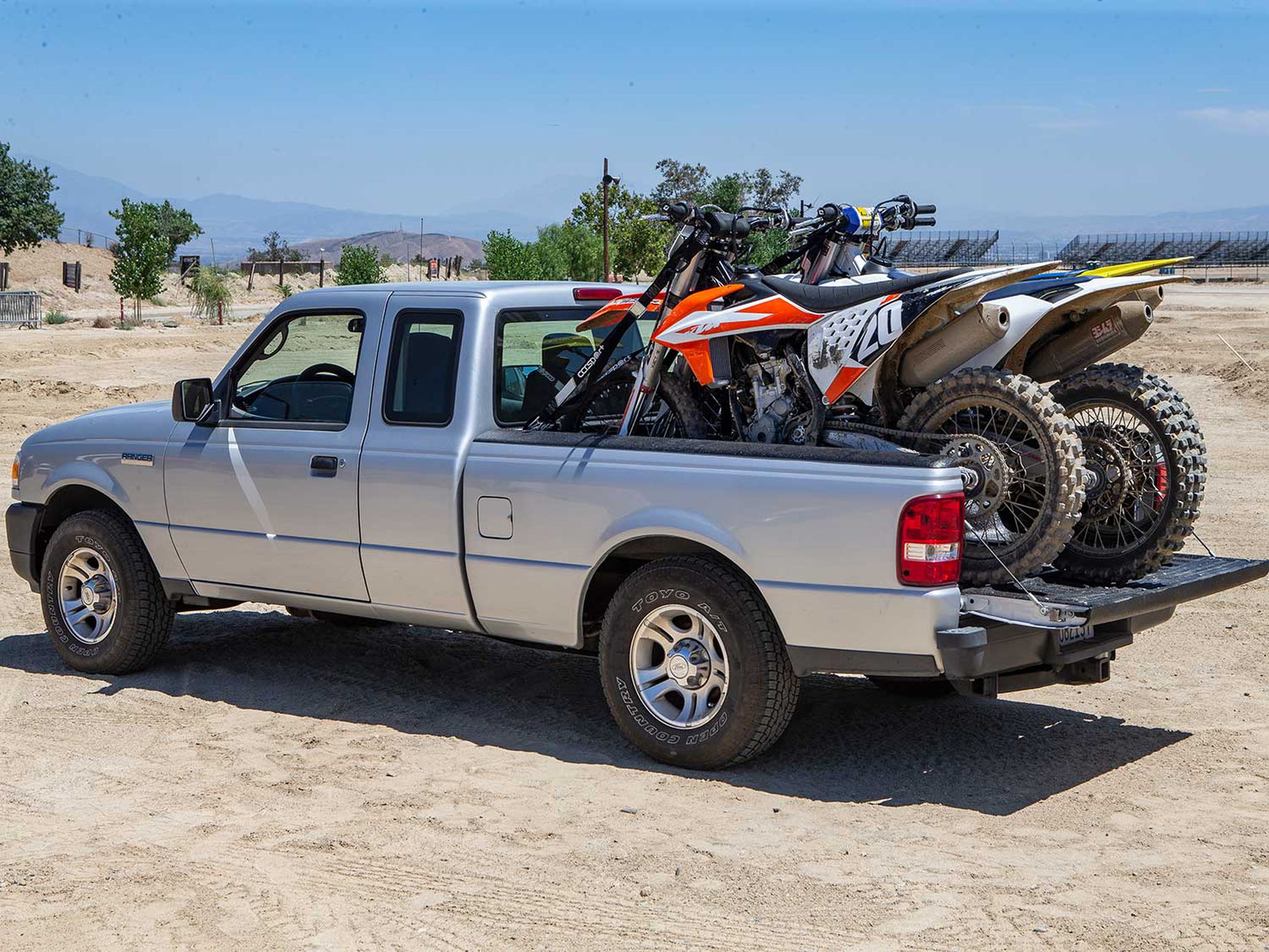 If you ride dirt bikes, there’s a good chance you own a truck or van to haul it to the track or trail. If you carry multiple motorcycles, chocking the wheels and securing the bikes so they don’t move around becomes a concern. After a long drive and navigating a potentially bumpy dirt road to a riding area, your bikes may have become loose, shifted positions, or potentially even caused damage to the motorcycles or vehicle itself if they were not tied down and secured properly. 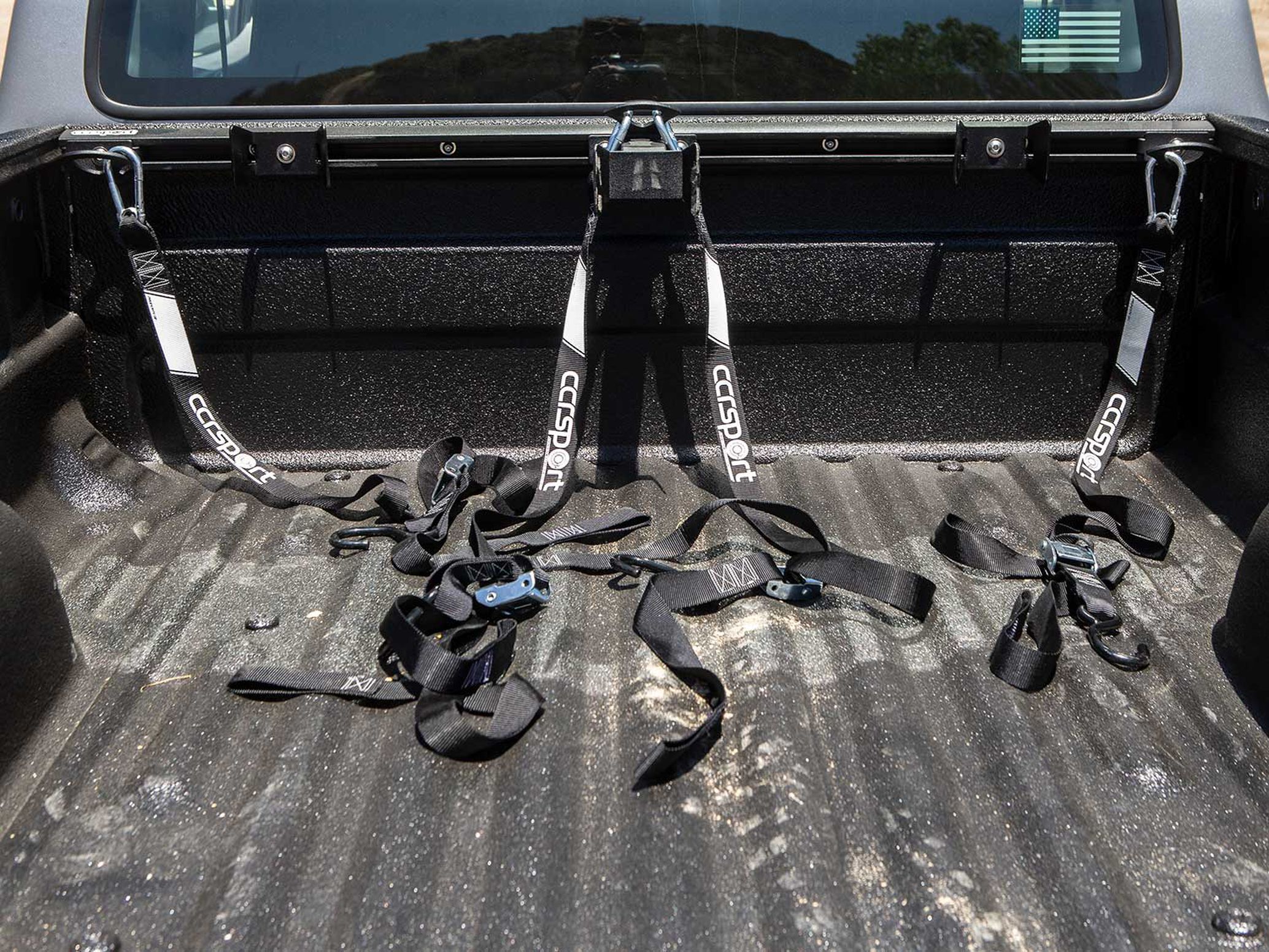 Chris Cooley founded CCR Sport in 1997 with the goal of creating the best solutions for people to haul cargo—namely dirt bikes—in their pickup truck beds, vans, and trailers. CCR Sport’s original motorcycle truck rack was the Bed Buddy, which is still available today and remains a very popular seller. Years later, the company introduced the ProTrack and it’s the newest motorcycle truck rack CCR Sport offers. The main difference between the Bed Buddy and the ProTrack is the ProTrack is adjustable, enabling you to arrange the wheel chocks and tie-down mounts however you like, and remove them if necessary. They’re also constructed of different materials. The Bed Buddy is manufactured completely of steel, while the ProTrack is made of 6061 extruded aluminum and its components are made of steel and are zinc plated. 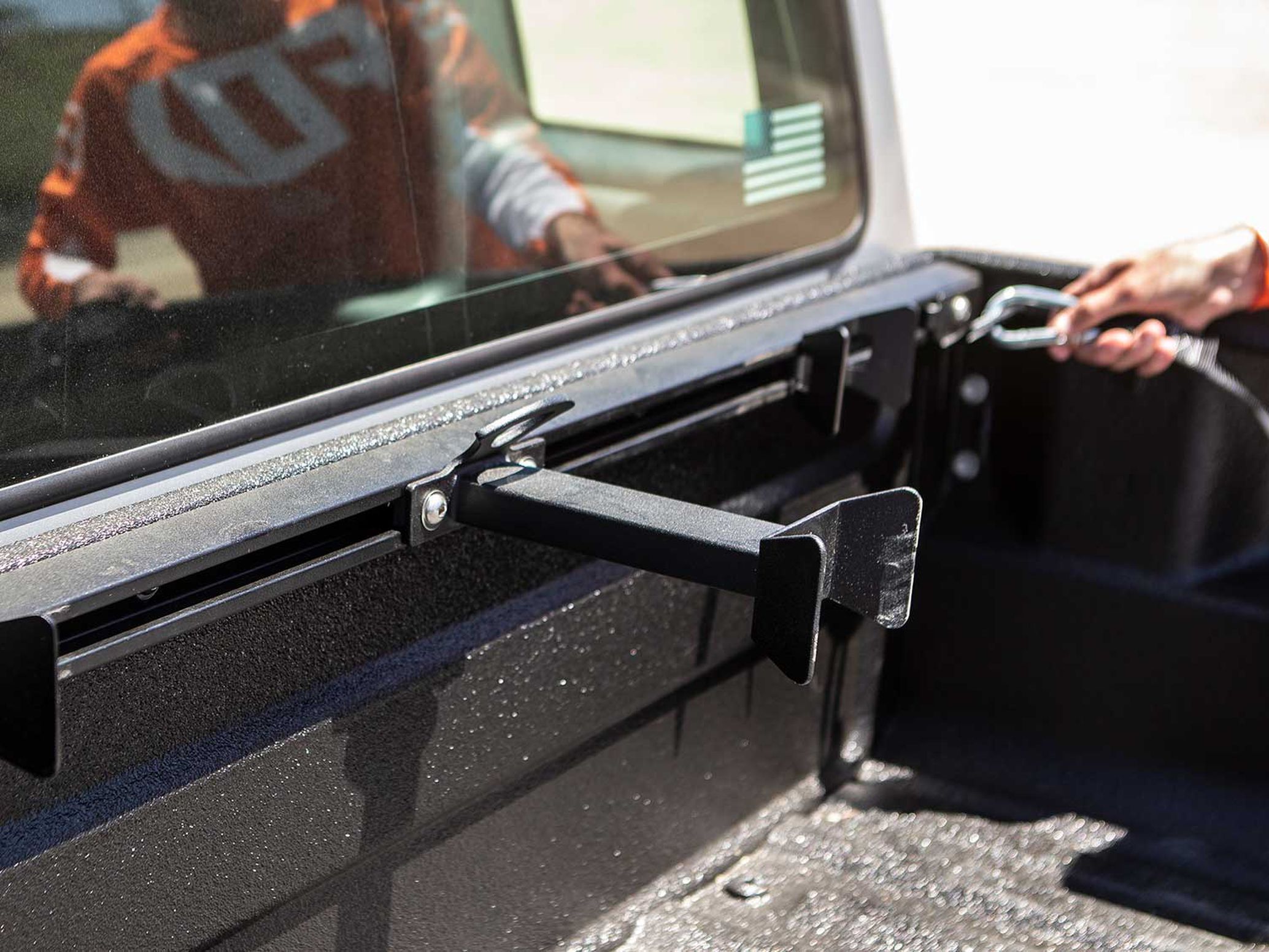 The ProTrack comes in three sizes: 60-inch, 57-inch, and 53.75-inch. Each is designed to fit different width truck beds. Before deciding which one is the proper size for your truck, van, or trailer, you will definitely want to measure it. CCR Sport lists the 60-inch as designed for most full-size trucks including the Ford F-150, F-250, and F-350; Chevrolet Silverado; and GMC Sierra 1500, 2500, and 3500; Dodge Ram 1500, 2500, and 3500; Nissan Titan; and Toyota Tundra. The midsize 57-inch is intended for use in most Dodge Dakota and Toyota Tacoma models, and some Ford F-150 trucks. The compact size 53.75-inch (as tested here) is designed for use in most Ford Ranger, Chevrolet S-10, Chevrolet Colorado, and Nissan Frontier applications.

The three lengths the ProTrack is offered in are the same price regardless of size. The price difference comes from the color and whether you want the Pro Pack or just the moto rack. The Pro Pack, which includes the ProTrack moto rack, two wheel chocks, three tie-down mounts, a Third Bike Extender, three pairs of Pro Moto 1.5 tie-downs, and installation components, costs $364.95 for black and $349.95 for silver. When ordering the moto rack, it includes the ProTrack, two wheel chocks, three tie-down mounts, and installation components, and retails for $234.95 for black and $219.95 for silver. We chose the Pro Pack so we would have everything needed to safely haul three bikes in the back of a 2009 Ford Ranger. 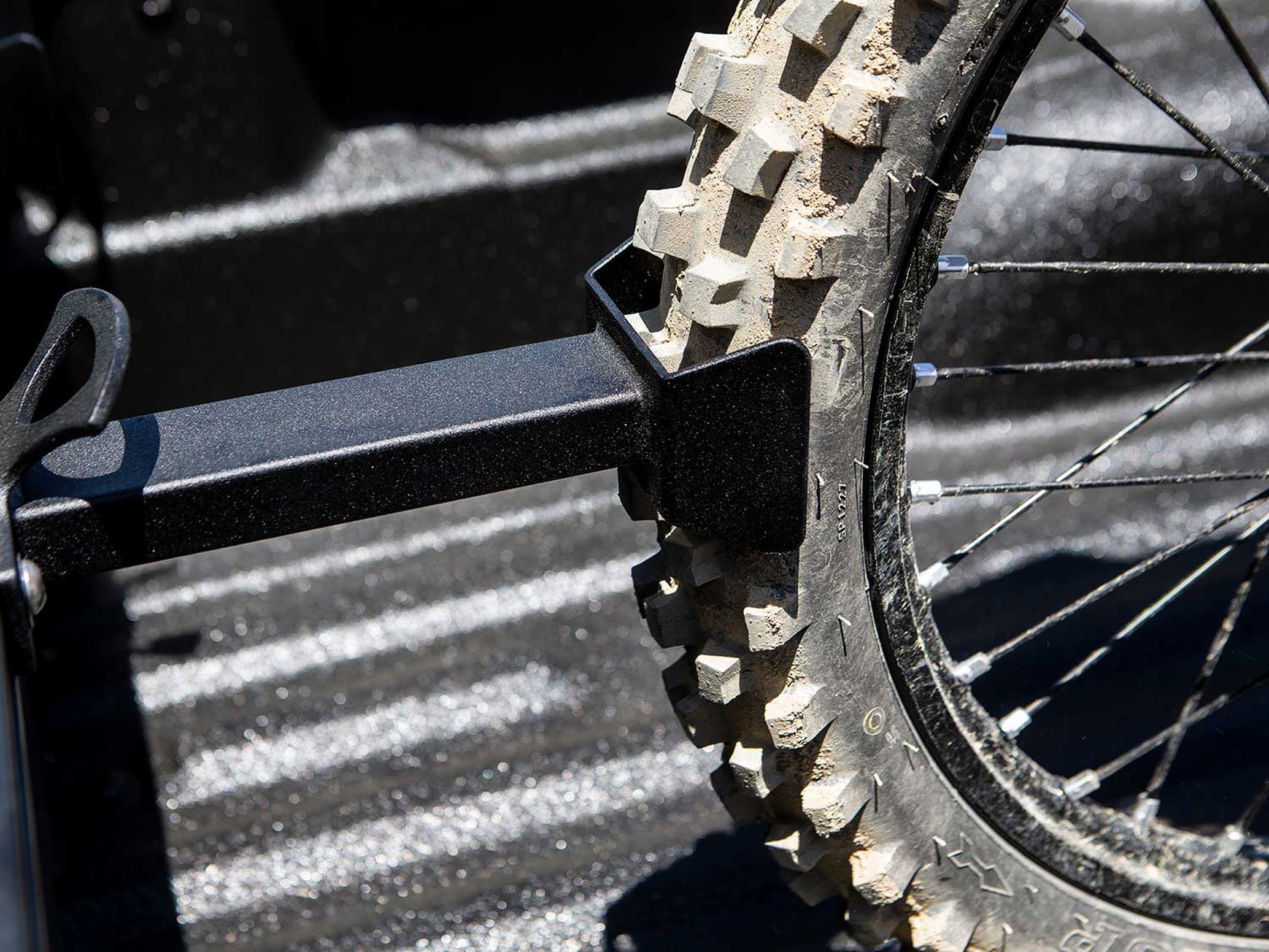 The ProTrack comes with two options for installation: through-bolt and the optional X-nut. The through-bolt is for any application that has access to the backside of the mounting point in order to attach a washer and nylock nut. The X-nut fasteners enable blind installation where access to one side is not possible and therefore makes it impossible to thread a nut and washer onto the end of the bolt. For our application on a Ford Ranger, there was enough space between the cab and bed, so we opted for the standard through-bolt.

Installing the ProTrack is a simple, straightforward process thanks to CCR Sport’s detailed instructions. When choosing where to mount the rack on the front of the bed, CCR Sport recommends it be on a flat mounting surface and so that a portion of the motorcycle’s front tire fits in the wheel chock. After choosing the mounting location, we drilled five evenly spaced 5/16-inch holes in the ProTrack, held it level in the truck bed, marked the areas where we wanted to drill the holes, double-checked our work, and then drilled 5/16-inch holes in the truck bed. 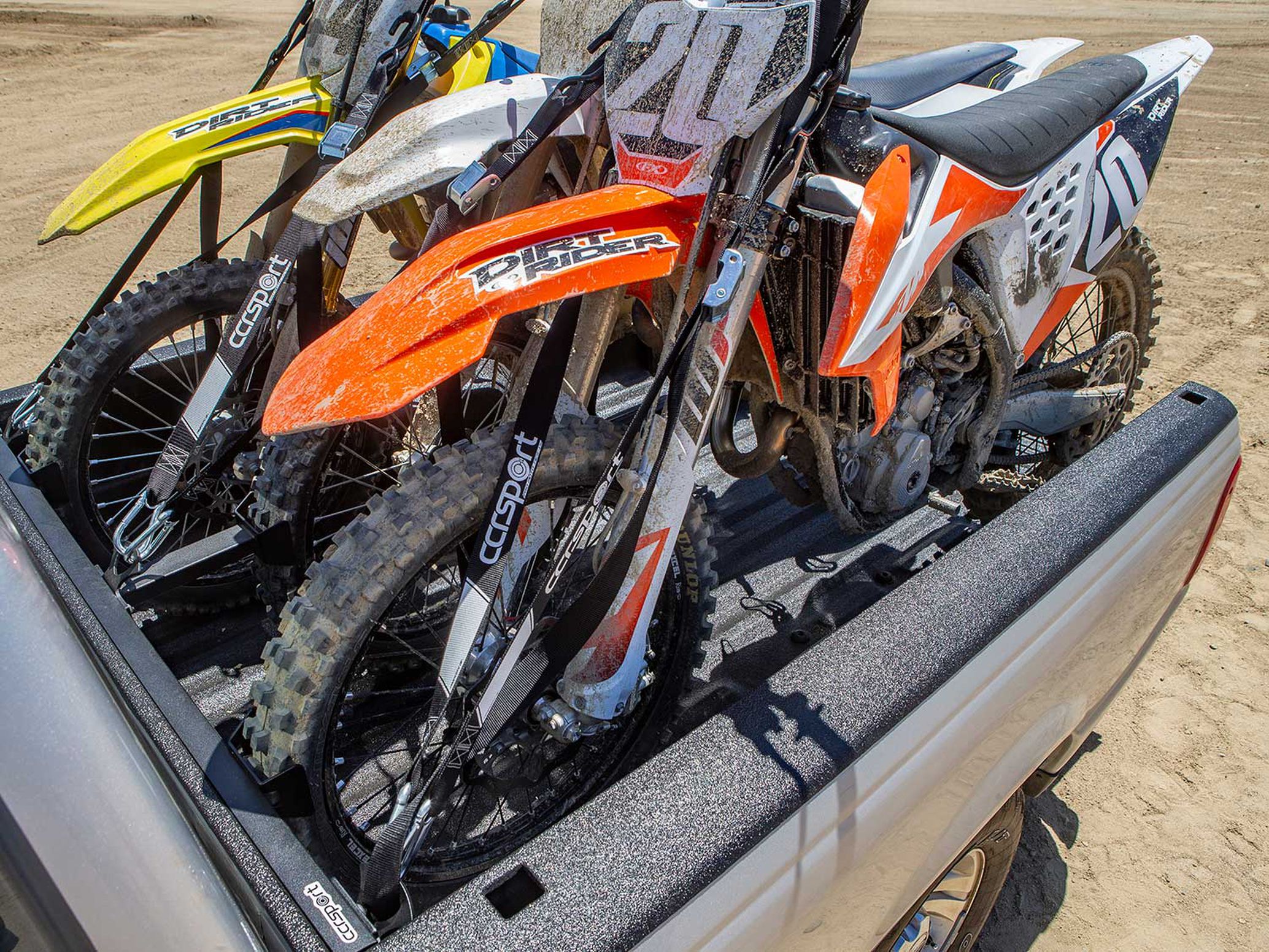 After lining up the ProTrack and putting the five bolts through, we secured them with the five nuts and washers on the backside, and the latter proved to be the most challenging part of the job. Although there is some room between the bed and cab of a Ford Ranger, it was a bit difficult to line up the nut and washer with the bolt and get it started on the threads, but it became easier after we did the first one and figured out the proper technique. 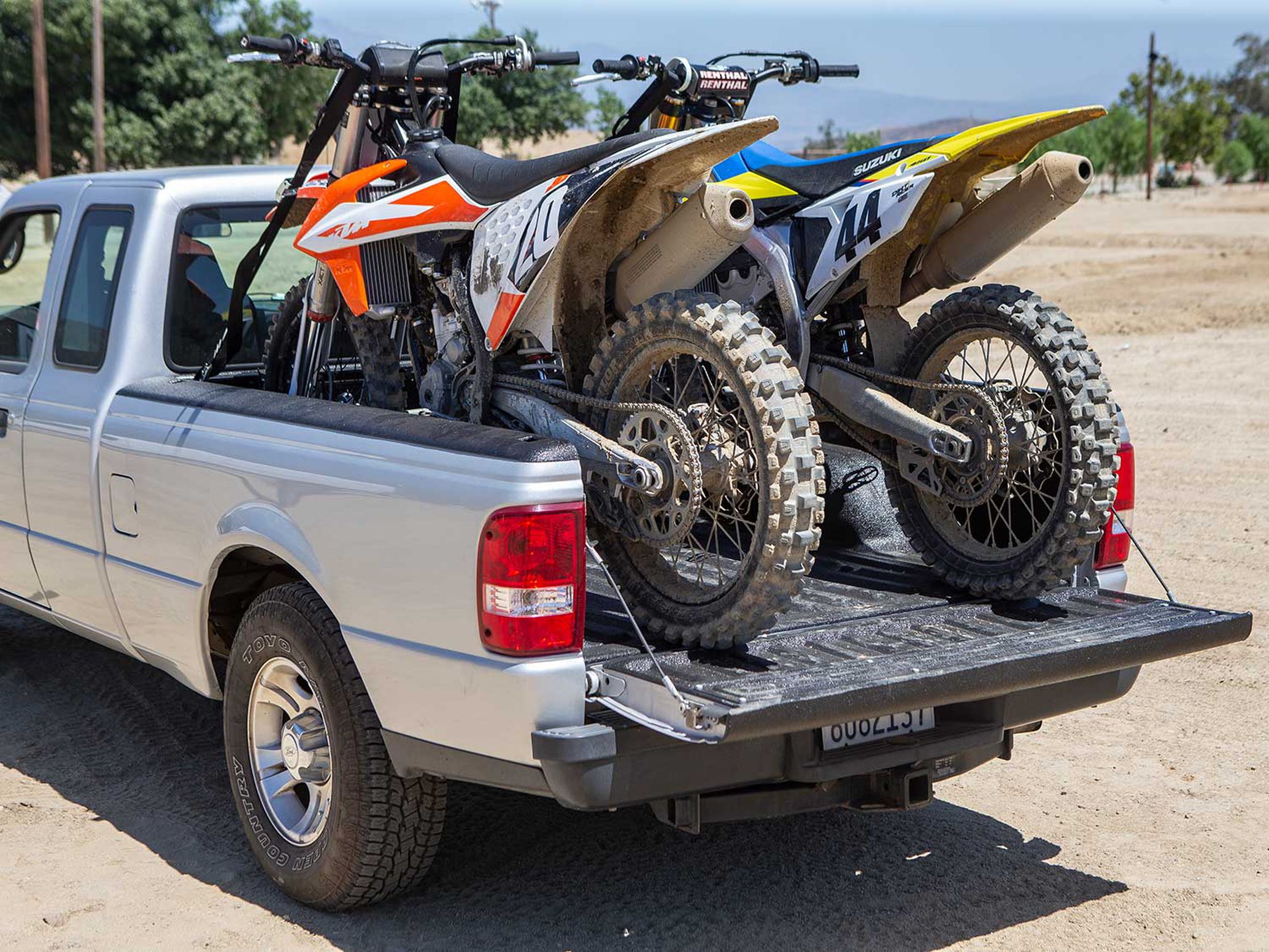 Once we began carrying bikes around, we found the ProTrack does an excellent job of keeping dirt bikes secure in the bed of our pickup. We have put it to good use when taking delivery of and dropping off test bikes, and of course when hauling them to the track and other riding areas. When traversing bumpy dirt roads, the bikes have remained stable and didn’t move around in the truck bed despite the uneven terrain. The Third Bike Extender offsets the middle motorcycle approximately 7.5 inches back in the bed from the other bikes so the handlebars won’t contact with each other. Like the rest of the components, the Third Bike Extender did its job remarkably well.

The Pro Moto 1.5 tie-downs complete the package, featuring a sewn-in soft-tie, 1.5-inch nylon webbing, a spot to write your name on them, and a carabiner bottom hook. They worked great and don’t slip or become loose; the only thing we wish they had is a swivel-type carabiner to help prevent them from getting twisted when attaching them to the bikes. Another benefit of the ProTrack is that it reinforces the front of the truck bed, making it less likely to bow inward toward the cab, which can happen over time from tying down multiple motorcycles. 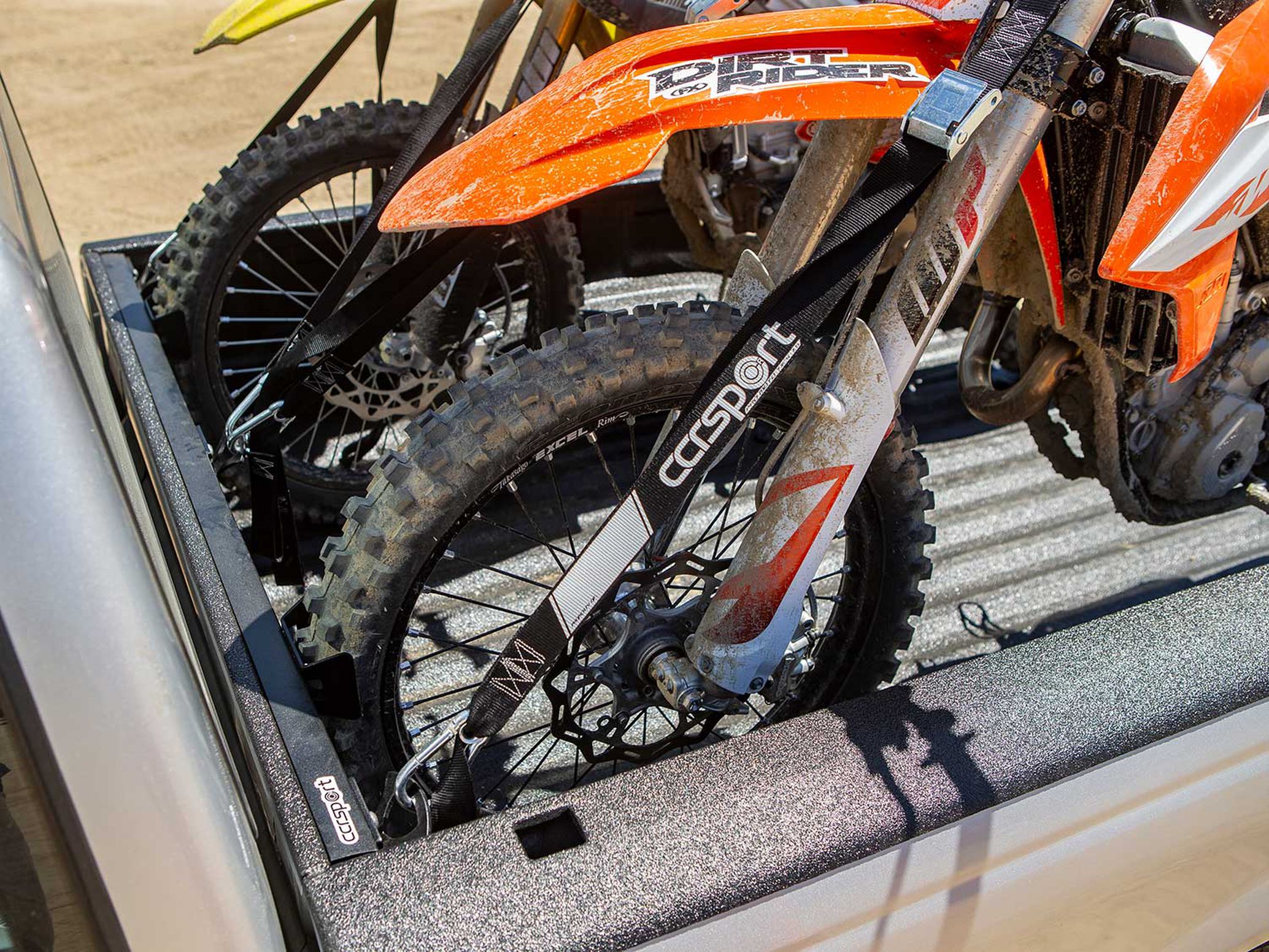 The ProTrack not only made hauling multiple bikes a safer, less worrying affair, but it also decreased the amount of time it took for us to load and unload bikes being that we didn’t have to intertwine tie-downs between the wheels and different parts of the bikes to secure them. We are thoroughly impressed with the function and quality of CCR Sport’s ProTrack moto rack and all of the components included in the Pro Pack. It has been a useful addition to this Ford Ranger and we look forward to getting plenty more use out of it for several years to come. 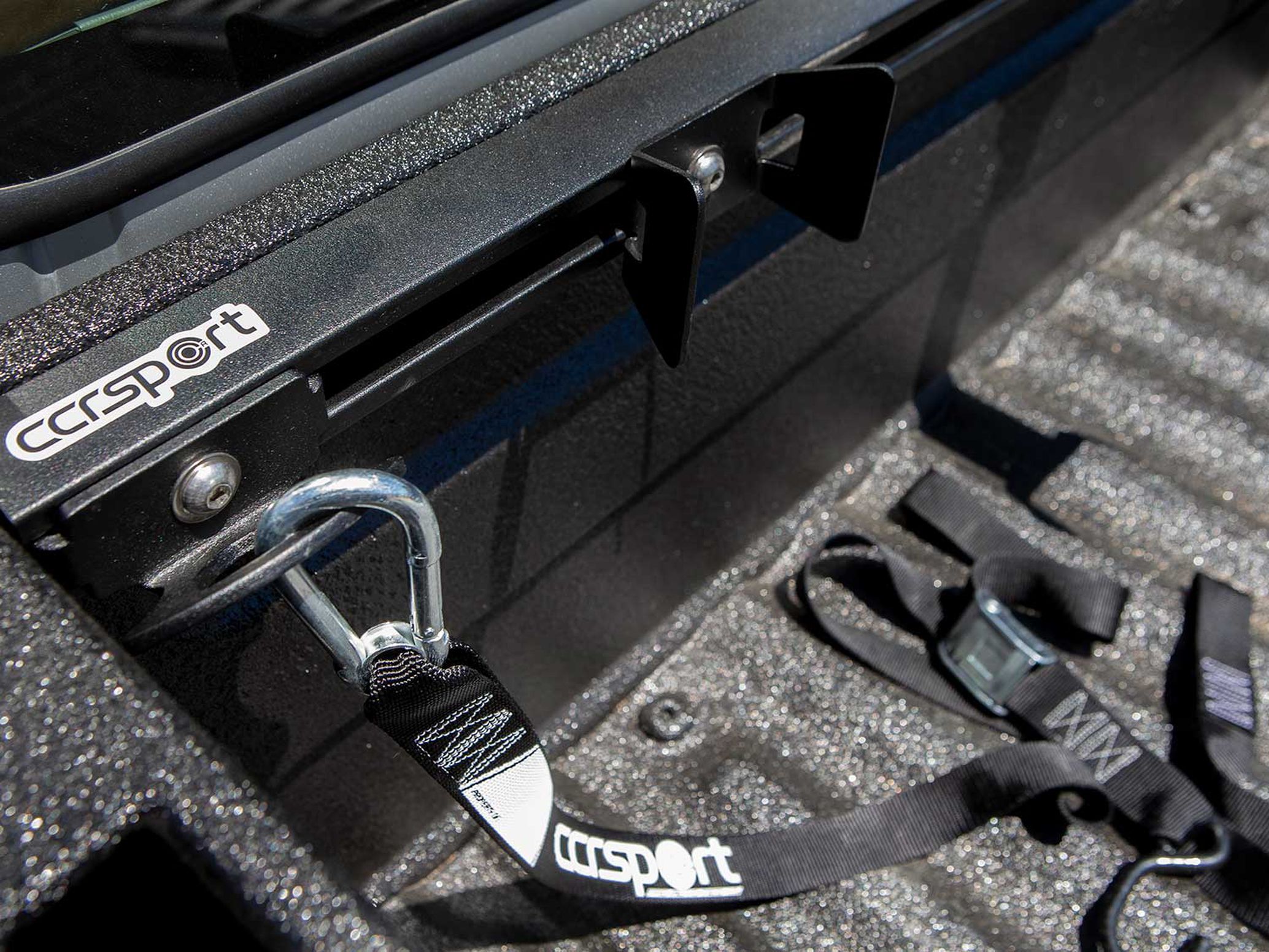